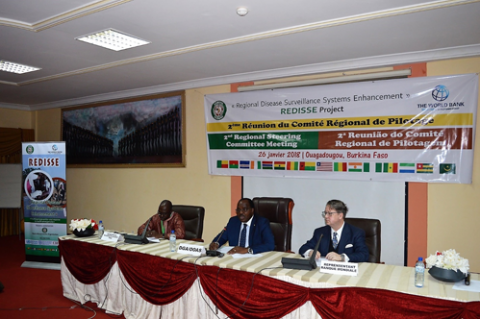 Ouagadougou 26 January 2018 – The West Africa Health Organization (WAHO) organized the second Regional Steering Committee Meeting of the project on Regional Disease Surveillance Systems Enhancement (REDISSE). The meeting, which was held in Ouagadougou, Burkina Faso on 26 January 2018, aimed at assessing the progress achieved in the implementation of the project in each country of the region, identifying the bottlenecks and making recommendations towards improving and accelerating the project implementation.

The Deputy Director General of WAHO, Dr. Laurent ASSOGBA, in his opening speech, outlined the objectives of the REDISSE project, which consists in strengthening the national and regional disease surveillance and response systems. He also recalled ongoing regional initiatives within ECOWAS, to which REDISSE project makes contributions towards their implementation: the Regional Center for Disease Control and Surveillance (RCDCS) based in Abuja, Nigeria, the Regional Laboratories Network (RLN), the National Coordination Institutions (NCI), the Regional Rapid Task Force, etc.

He noted that the REDISSE program is an independent set of projects aiming at building national, regional and inter-sector capacity for the integrated surveillance of diseases and interventions in West Africa.

Dr. Clark expressed satisfaction about the fact that West Africa is a pilot site for the REDISSE program, which will be replicated in other parts of the world, particularly in central Africa, the Carribean, East Asia and the Pacific.

He therefore insisted on the importance of an effective and efficient implementation since “Our success or failure will influence the manner in which the rest of the world thinks about surveillance and response to diseases. You are at the forefront of an innovative approach, which is at the same time regional and multi-sector; an approach, which places premium on the sharing of information and resources, collective action and one health approach”, Dr. Clark stressed.

Dr. Clark expressed the desire to see all the countries included in the project before the end of 2018. ‘… I hope between now and the end of next year the REDISSE program will include all ECOWAS member States and neighboring Mauritania’ declared the World Bank Project Director.

On his part, the representative of the togolese Minister of health and social protection, Dr. AWOKOU Fantchè, REDISSE project Coordinator for Togo, after extending greetings from his Minister to the members of the Regional Steering Committee, reminded participants of the cross-border nature of the epidemics and the need to pool efforts to provide appropriate, effective and prompt solutions.

A two-day meeting of the technical subcommittees preceded the second meeting of the Regional Steering Committee.  This meeting outlined the progress made in the implementation of the REDISSE project in each country. The subcommittee members (1) evaluated the level of implementation of the recommendations from the steering committee meeting held in Conakry from 23 to 25 January 2017; (2) examined the level of implementation of the annual budgeted work plans (ABWP) for 2017 and the Procurement Plans (PP) for the countries and for WAHO; and (3) analyzed the 2018 Annual Work Plans and the PP for countries and WAHO, with recommendations to be submitted for validation by the steering committee;

The outcome and recommendations of the meeting were discussed at the second meeting of the regional steering committee.

At the end of the Regional Steering Committee meeting, eight (08) recommendations were made, five (05) of which were addressed to WAHO.

Closing the meeting, the Deputy Director General of WAHO Dr. Laurent ASSOGBA, thanked participants for arriving at a consensus to validate the report of the members of the technical subcommittee as well as the recommendations. He thereafter recalled the challenges relating to the control of epidemics through the implementation of the requirements of the “one health” approach, and the role of the National Coordination Institutions in the countries. He thanked the World Bank group and the other implementating partners for the multiple forms of support they continuously provide to countries and to the region. He expressed the wish that the results of the meeting would be shared with other sectors for better synergy in the implementation of the activities.

The meeting proposed Liberia to host the next meeting of the regional steering committee of the REDISSE project.